At just four years of age, Ashleigh Hackett brought down the house in her stage debut appearing with her father, comedian Sandy Hackett, in a holiday performance at the Las Vegas Hilton for over 2,200 people. Now at 14 years old – a singer, actress and an accomplished dancer, Ashleigh has released several music videos and single recordings. She has appeared live on stage at numerous performing arts centers across the country.

In 2017, Ashleigh released her fourth original single, “On and On and On,” following her 2016 single and music video release of, “Slay,” an original song about the power that girls have to change the world and to “fight for freedom and the choice.”

Ashleigh made her solo debut as a singer and dancer at nine years old with her first single release and music video, “Let’s Go!” Ashleigh was invited to South Carolina to headline the 2015 Charleston Kids Fair where she premiered her follow-up original song, “Can You Feel It?” In April 2015, Ashleigh released a behind-the-scenes video which chronicled the highlights of her journey to Charleston, South Carolina.

Ashleigh played the role of “the Angel” in the 2010 remake of “One Little Christmas Tree,” released by her then 10-year-old brother, Oliver Richman. The song was written by legendary songwriter, Ron Miller – Oliver and Ashleigh’s grandfather. Ashleigh has toured across the country making numerous guest appearances in “Sandy Hackett’s Rat Pack Show” to rave reviews, performing alongside the character of “Sammy Davis, Jr.” in “Candy Man.”

Ashleigh was born into a long lineage of world-class entertainers, writers, musicians, and performers. Ashleigh’s paternal grandfather, legendary comedian, Buddy Hackett, starred in several blockbuster films including Disney’s “The Love Bug” and “The Little Mermaid,” and in other classics such as “It’s A Mad, Mad, Mad, Mad World” and “The Music Man.” Buddy received the prestigious Disney Legends Award and appeared on the “Tonight Show” with Johnny Carson more than any other entertainer.

Ashleigh’s maternal grandfather, Ron Miller, has written some of the biggest hit songs/standards including, “For Once in My Life,” “Touch Me in the Morning,” “Place in the Sun,” “Yester-me, Yester-you, Yesterday,” “Heaven Help Us All,” “I’ve Never Been to Me,” “Someday at Christmas” and “If I Could.” He was the recipient of the Heroes and Legends Award for Lifetime Achievement in Songwriting and was inducted into the Grammy Hall of Fame.

Ashleigh’s big brother, multi-talented 19-year-old singer/actor, Oliver Richman, has released numerous singles and music videos including “For Once in My Life – The 50th Anniversary Release,” “Count on Me,” “Believe” and “Celebrate Me Home.” He was invited by Stevie Wonder to share the stage at L.A. Live, where he received a standing ovation from over 7,500 people and was featured on Byron Allen’s Entertainment Studio’s “The Young Icons,” a nationally syndicated television show about young people changing the world. He is currently a New York University Tisch School of the Arts student studying drama | musical theatre.

Ashleigh is an 8th grade drama student in Los Angeles. She loves her family, performing, the theatre, music, dance, getting together with friends and her golden retriever, Charlie. 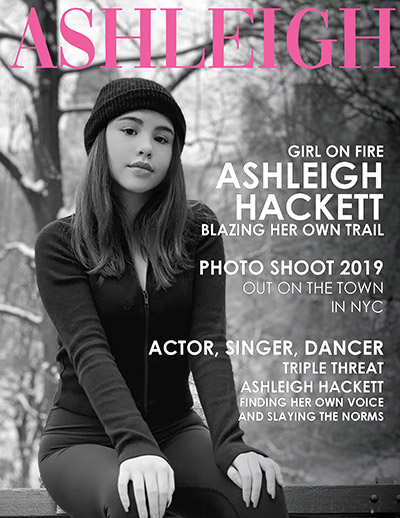